Monsters don’t always need to be big, or scary, or even horrible in order to be monsters.  So what do you call a monster who’s small, adorable, and uncontrollably rambunctious?

This is Gronk, A Monster’s Story, by Katie Cook

Gronk was never too good at being a monster. She hates the food, is too cuddly to scare anyone, and the other monsters make fun of her for it. So she decides to leave… and ends up meeting Dale, a young human who lives near the woods with her pets Kitty and Harli. Despite a rough first impression, Dale quickly bonds with the little lonely monster and invites her to come live with her. And so begins Gronk’s life in the human world (and the magic that is pop-culture geekdom).

I really don’t need to do more than link to the comic’s lovely About page, but in quick blurbs we have 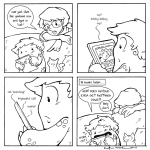 Gronk the eponymous monster. Small and childlike, she loves all things cute and fluffy… well, most things. Despite her own adorable exterior, she has a tendency to revel in morbid humor or imagine herself as a force of inexorable destruction. She’s inherited her love of all things geeky from Dale.

Dale Wilco works out of her home in the woods, with her feisty pet cat Kitty and her large and lovable dog Harli. A music composer who works from home, Dale has a deep love for sci-fi and fantasy, classic films, iconic children’s books, Sesame Street, and animated media. Naturally, she’s the sensible parental figure to Gronk’s unruly childishness, although she certainly has a few quirks of her own. 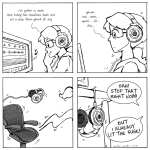 Simple, clean, and invitingly cute, the art for Gronk is a perfect fit for a comic all about a little monster with a love for plush kitties and all things awesome. Gronk “inherits” her geekiness from Dale, which opens up the door for all kinds of geeky references. I adore Gronk’s squat little body and nubby tail and the giant beanbag chair on legs that is Dale’s dog Harli. Gronk also has some of the most hilarious expressions you could ever find in a comic and it’s particularly great seeing her go over the top.

Gronk is mostly a slice of life comic and as such, there isn’t really much of an over-arcing story. The closest we get are miniature arcs of two to four that are really just extended jokes. That said, the writing is great for what it is and what it is is a Calvin and Hobbes-esque four panel comic about a wild, imaginative, precocious young monster and the loving parental figure she’s slowly driving up a wall. There are even a few nods to Bill Waterson’s work and others. 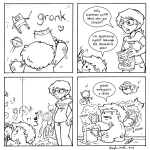 The writing itself successfully runs the gamut from sharp social commentary to the most quintessential forms of comedy. A lot of the jokes are derived from situations that virtually every parents knows or hears about; the discovery of cursing, potty training, drawing on the walls. You name it, this comic covers it. Like I said before, the best comedy comes from things that can happen in real life.

All in all, an adorable, hilarious series that highlights the delightful craziness (and heart-touching emotion) that comes with raising a child. 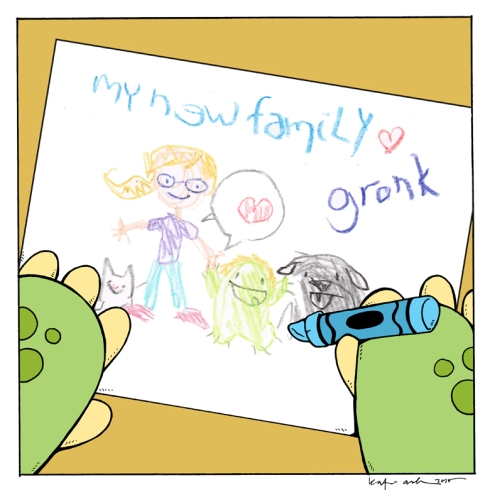 Gronk, a Monster’s Story is written and drawn by Katie Cook. This comic, including all images used here, belongs to her.

Reviews webcomics regularly because he's a little bit insane. END_OF_DOCUMENT_TOKEN_TO_BE_REPLACED
This entry was posted on Friday, May 23rd, 2014 at 11:05 pm and tagged with Comedy, Cute Monster, Humor, Parenting, Review, Slice of Life, Webcomic and posted in Web Comic Reviews. You can follow any responses to this entry through the RSS 2.0 feed.
« People are People: Monster’s Garden
Monstrous Mayhem: Monster Pulse »